Robert Carter
Toronto, Canada
webmaster PHSC (opinions expressed here are my own and not those of the PHSC)

About the European Rules

As a courtesy, we have added a notice on your blog to explain Google's use of certain Blogger and Google cookies, including use of Google Analytics and AdSense cookies, and other data collected by Google.

You are responsible for confirming this notice actually works for your blog, and that it displays. If you employ other cookies, for example by adding third party features, this notice may not work for you. If you include functionality from other providers there may be extra information collected from your users.
Posted by Robert Carter at 9:04 PM No comments: 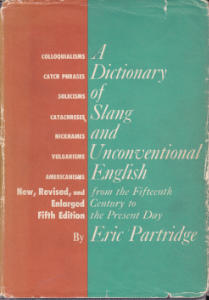 When I was in University, I browsed the used bookstores in Montreal searching for any interesting book.

In March of 1963 I found Partridge's book "A Dictionary of Slang and Unconventional English" dated 1961.

It was a big hit at school that fall. The book records all expressions except the coarse words related to se and the human anatomy - words banned at the time the book was printed but no longer.

The quotes it did contain were educational and down right interesting. Well worth the $8.98 I paid for the hard cover, signature sewn, 1,362 pp dust cover included remaindered new book!

Posted by Robert Carter at 8:45 PM No comments:

give me a ring 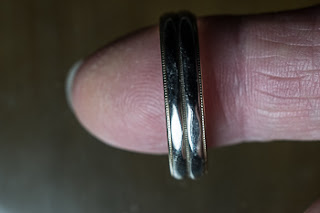 Last December was so cold my wedding ring fell off and I lost it. A week long search came to nada.

By April, it was time to replace the missing bit of jewellery. How times have changed in half a century! Most rings today look down right ugly to me.

Modern day stores view 10k as sturdy and 14k as a softer alternative.  The Birks clerk said they sell only 18k, with a sniff and a toss of the head. We thought the larger stores and the larger malls would have a wider choice. Not so. The larger chain jewellery shops did offer more, but had to send to a warehouse to get the correct size - about a month or so. The few chain department stores around had little choice and indifferent staff. One clerk at a large jewellery store suggested a small private shop with its own craftsman would custom make a ring.

Great idea as it turned out. We saw the man at our favourite small shop and sealed the deal. He would make a ring similar to the lost one and at a reasonable price.
Posted by Robert Carter at 7:13 PM No comments:

Don has a gas attack

The other day my neighbour dropped by to see how much our last gas bill was as we had the same house design as him. Our bill turned out to be nearly a third the cost of his bill. I suggested to Don that that much gas over a month would have had his home boiling hot!

I suggested there was a meter issue and to check his meter first. He did. His meter reading was far less than it was a week earlier according to his invoice! Problem solved. The meter reader or someone along the line had mis-read the numbers and seriously over stated his usage.

A call to the gas company and the issue was resolved. Don was asked to pay about what we paid
(we both have high efficiency furnaces). Makes you wonder since the gas company can accurately estimate usage and such a spike in "actual" use should have raised alarms.
Posted by Robert Carter at 6:20 PM No comments:

a tale of two computers 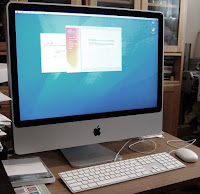 Carol's Macbook Pro prompted a bag of complaints from her recently. It finally quit abruptly while updating the FireFox browser. I spent a few days attempting to download a new OS X for her. No luck. The Macintosh HD kept showing as all okay in Disk Utility but refused to mount. I could boot from the backup drive I made for my iMac (very slow) but the internal Macintosh HD still refused to mount and be visible!

On the other hand my old 24 inch iMac made a year or two earlier did let me purge it and reformat and reinstall the OS X Mavericks. It worked like a charm and Carol spent Sunday afternoon cleaning the keyboard,  magic pad, and screen with alcohol and invisiglass using a pin and a dental scraper on the keys as they had a decade plus of grime and dirt on them.
Posted by Robert Carter at 6:07 PM No comments:

let there be light (finally) 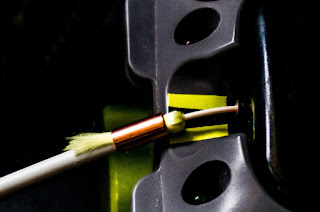 And on June 20th, 2017 we were finally connected to Fibe TV via fibre cable.

To my surprise, the contracted technician (Bell long ago shed most outside and other none-core personnel) had to run a very long drop from the aerial terminal at the north west corner of our lot to the north east corner pole, strapped to the overhead cable, and then into the furnace room on the east side of my house.

While manuals have not yet appeared (last checked late 2017) the numerous electronic boxes had been consolidated to one plus a backup power cube. The telephone (land line) now goes over the fibre cable with the router converting the signal so installed in-house telephone cabling can be used as it is. The set top boxes (STBs) and internet are all connected via wifi emanating from the furnace room mounted router eliminating any need for data cables. Each TV has a wifi enabled set top box with a built-in hard drive for recording TV shows (my computers, printer, and iPod Touch all have wifi too).

During a power outage, the backup battery, can keep the telephone and internet connections going for up to four hours. Only the IPTV signal is lost. Upstairs the STB is 4K (our TV is HD just now) and downstairs it is HD. The TV signal - voice and video - still freeze at times for a second or two but the loss of signal as the trees begin adding leaves no longer happens (our old dish PVR was in bad shape with only a few receivers working at all to receive signals from space. And the resolution is so much better too if we watch HD channel signals.
Posted by Robert Carter at 5:36 PM No comments:

coming to a home near you 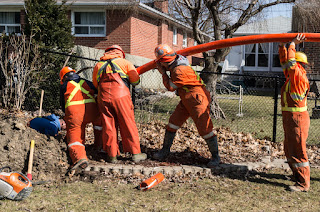 After years of disappointment, Bell was in the neighbourhood (mid Etobicoke) installing fibre optic cable to the home ( FTTH) and in later February of 2017 the contracted company began to install here.

A team dug up our north east garden and proceeded to add the bright orange conduit tubing that would carry the fibre cable from an aerial  terminal in the north west of our yard to the nearby central office by a convoluted route that made a distinct u-turn and connected to another fibre cable in a manhole near-by.  Great, I thought, we can finally switch over from Satellite. "No", said one supervisor, "it will take a few months to connect you to the fibre". And sure enough, it took another FOUR months to connect us!
Posted by Robert Carter at 5:13 PM No comments: